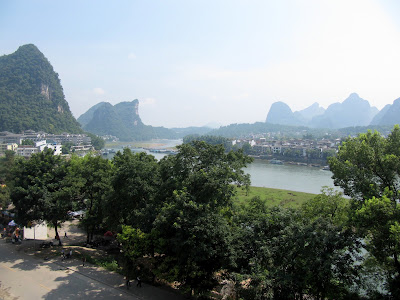 [Photo: View of the Li River from my conference hotel in Yangshuo, China]

I think I just experienced one of the longest travel-related liminal experiences ever (at least for me).

Liminal experiences are those that are characterized by transitions from one state of being to another. Tourists experience liminality when they transition from a home-based state of being to a travel-based state. Liminality also occurs during rights of passage, such as graduating from school, becoming married, becoming a parent, or becoming a new employee of a company. The liminal experience is one of becoming something different, and is potentially transformative, with a shedding of the old and a creation of something new, but also a period of vulnerability and weakness in the face of an uncertain future.

The transformative potential of travel is one of the major reasons that many people want to travel. Even when a trip is fully planned and fully chartered and catered, there is still the possibility, if not probability, of meeting new people, seeing the unexpected, and doing something that is totally unconnected to one's home. The period of liminality, the transition between being a resident-in-place and being a tourist-on-the-road, normally occurs when the tourist is in transit between their home and their destination. For most people it is a period of expectation, anticipation and hope – the emotions are generally positive, though there could be some strain related to the exertion of travel.

However, there is a second liminal experience that is a bit different. This experience occurs at the end of the trip, when the tourist is returning home and transitioning from being a traveling-guest to a resident-host. In this case, the emotions may be either positive or negative. Negative emotions may be related to reverse culture shock, which arises when a tourist "goes native" in an exotic destination and must readjust to "going native" in their home place. Going native during a trip actually refers to developing a sense of attachment to a place. This attachment may be to the physical place, a culture in that place, or an individual(s) that was met during the trip. In each of these instances, the return home is accompanied by a sense of separation and loss. That loss may be addressed by an attempt to develop or maintain a longer-term relationship with the travel destination through repeated visits or other commitments and activities.

For example, I experienced a deeply moving trip to the Shan State of Myanmar in 2005. I blogged about that trip – basically keeping an online trip diary (http://golden-triangle.blogspot.com). After the trip, I continued for a year to post and discuss news items about Myanmar. Eventually, however, my attachment to the people and culture of Myanmar waned and I stopped blogging about the country, though I still hold it in a special place in my memory. Tourists also develop an attachment to each other, mostly when traveling as a group of some kind. The sociologist Ning Wang has referred to this social bonding as "touristic communitas," and it too can result in a sense of loss when the trip comes to an end. Close friendships can form that continue via long distance, and which may remain strong, though they are more likely to fade with time.

In both of the post-trip instances cited above, intentional efforts can be made to continue attachments to place and attachments to people beyond the trip. This effort is part of the remaking of self that is one of the goals of travel and tourism. (I believe this is the major reason why people travel.) The effort varies considerably from one person to the next. For some, the attachment is a mild one where the destination simply occupies a check mark on the list of places that have been visited – a kind of trophy or bragging right. For others it is more meaningful, either in terms of personal relationships or professional relationships. The permanence of these relationships will also vary considerably, though maintaining strong ties over a distance can challenge any relationship. We might think of the liminality of the return trip as never really ending so long as an intentional effort to maintain a place, culture or person relationship continues.

That being said, there is another way that the liminal experience of a return trip can seemingly last forever. That is when the tourist is ready to return home before the trip has ended. And that is what I just experienced. I just got back from a trip to China to attend a tourism conference in Yangshuo (near Guilin). Prior to the conference, I traveled with a colleague in the Business School at Northern Arizona University who had a conference to attend in Chengdu (Sichuan Province). So I spent about five days touring the Chengdu area prior to the tourism conference, which lasted for an additional four nights. I also spent layover nights in Shanghai on my way to Chengdu and again on my way home from Guilin. Altogether, I was gone for 15 days. However, after touring Chengdu and then attending my tourism conference, with a very full day of outdoor activities in Yangshuo (which was very, very hot and humid), I was pretty burned out and was ready to go home.

However, I did want to see the larger city of Guilin (where the airport is located). I had been to Guilin four times (first time in 1988) in the past and wanted to see how it might have changed since my last visit in 2001. Also, my colleague had never been to Guilin and also wanted to see the city. Finally, he also arranged for us to get free accommodations in exchange for guest lectures at Guangxi Normal University. But just like in nearby Yangshuo, Guilin was very, very hot and humid, and the hotel we stayed in was the lowest quality of the entire journey (no internet, cockroaches, and in need of new carpets -- though it was free!). On top of this, I was coming off of an emotional high from the great meeting we had in Yangshuo, and feeling the loss of separation (as described above) that often accompanies the end of these meetings (which I help to organize every two years in China). So, as much as I wanted to see Guilin, I really wanted to just go home. I was done with my trip in Yangshuo and I had entered a liminal state of mind, which made me feel somewhat weak and emotionally vulnerable (not feelings that I get very often).

The Shanghai Airport Hotel (aka the 168 Hotel) was a very pleasant surprise, with weak but workable internet access, at Y398/night (about US$58/night),. This gave me a good rest for my cross-Pacific flight the next day. I dislike LAX (really bad internet options), but was lucky to be able to change a seven hour layover there into a one hour layover, getting me home sooner than expected. So I have almost completed my liminal transition, I almost over my liminal anxieties, I am reconnecting with conference colleagues to build on the new relationships made there, and I am glad I went to Guilin, despite all the challenges. Now, we'll see how long it takes to get over the jet lag, which is always worse for me when upon returning to Arizona from Asia... 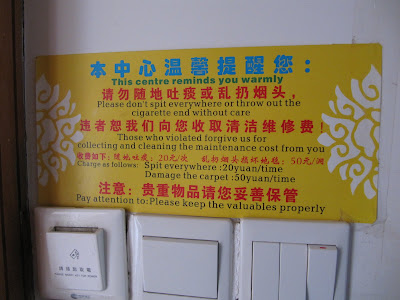 [Photo: sign inside my hotel room at the old Chinese hotel I stayed at in Guilin, China.]