'Sustainable development' has been a popular conceptual framework since the World Commission on Environment and Development issued its report to the United Nations in 1987 (WCED, 1987).  Also known as the “Brundtland Report”, after the commission’s chairperson, Gro Harlmen Bundtland of Norway, its goal was to define a new approach to addressing pressing social and environmental needs of the world.  Among its chief concerns were

Sustainable tourism, however, mostly applies to mostly amenity rich geographic settings and, as such, is a niche area of application for the broader sustainable development paradigm. Urbanization, as a primary force for global social transformation can provide a more general and perhaps universal perspective on sustainable development. Several efforts have been made in popular media, for example, to rate the sustainability of cities, along with justifications for those ratings. A compilation of several of those lists shows a dominance of European cities, followed by North America and then a few cities in other parts of the world (table 1, sources: d'Estries, 2011; Grist, 2007; Linssen & Sindik, 2008).

What is more valuable for these sustainable cities lists is the criteria that they are based on. A review of the sources for table 1 resulted to two general types of criteria against which these cities stood out in various ways: their environmental footprint and their quality of life (table 2) (see also, . The environmental footprint of cities includes technological investments and innovations that either reduce greenhouse gas emissions or, secondarily, enhance the recycling of natural resources. As such, they are efforts to reduce the environmental impact of cities, with ultimate goals of reducing or mitigating the worldwide severity of global warming and environmental change. Quality of life criteria, on the other hand, are much less narrowly focused on global environmental issues. Instead, they address local lived experiences and the creation of places that are comfortably adapted to their social and environmental geographies. Open space, park lands, air, water, transportation systems, forests and heritage sites are shared, common resources that require conservation for future generations as much as the fossil fuels and other non-renewable resources. 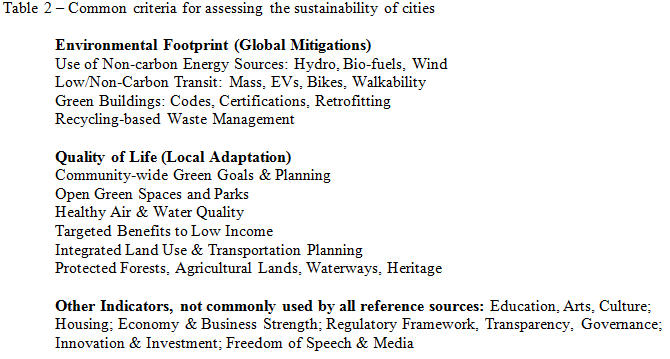 The sustainable cities criteria in Table 2 reflect the perspective of environmental organizations that are the strongest supporters of sustainable development, which reflects a strong bias toward the conservation of natural and social resources.  It also shows a bifurcation in that perspective between mitigation, which is a mostly engineering challenge, and adaptation, which is a more difficult social planning challenge.

The difference in these two perspectives is also evident in the area of sustainable tourism. The most common approach to instituting and verifying sustainable tourism is through engineering evaluations of the environmental footprint of a hotel, resort or tourist attraction that result in green certifications. This approach to sustainable tourism is popular because it is easier to conceptualize and more readily measurable than are social planning objectives. Tourism industry sectors throughout the world have adopted green certification programs both to mitigate the environmental impacts of tourism activities and as an effective marketing mechanism for some travel segments.

How tourism activities impacts local quality of life is occasionally acknowledged by the tourism industry, which mostly associates this through contribution to employment creation and the conservation of traditional culture through artistic displays and performances, and various forms of museumization.  Tourism’s broader roles in community development are addressed more by non-governmental organizations (NGOs) and social scientists than by private sector tourism industry representatives.

The distinction in tourism development between private businesses ownership of environmental mitigation measures and public sector and civil society responsibility for public goods is not exclusive. Governments also build green buildings and adopt internal energy efficiency and recycling practices to reduce their environmental footprint.  In doing so, however, they are behaving more like private sector entities, rather than setting public policies that influence broad sectors of community behavior. The true distinction here is the public goods nature of the resources that comprise most of the quality of life sustainability criteria. The profit driven private sector is seldom, if ever, given primary responsibility for ensuring a community’s water and air quality, and shared open spaces.

After two and a half decades of sustainable development, this is where we have arrived the sustainable development paradigm has brought us.  There is a private sector primary focus on the technology of climate and ecosystem mitigations, and there is a public sector dominance of the realm of quality of life. These are both positive experiences that have benefitted the communities by reducing environmental impacts (footprints) and creating more livable places where they have been adopted.

The problem is that although sustainability paradigm practices have been adopted throughout the world to a degree beyond the expectations of many, they have not resulted in effective responses to global climate change and widespread poverty and hunger.  Some have even argued that the success of sustainability has resulted in a depoliticized and coopted climate change concerns, resulting in post-modern indifference to the future (Swyngedouw, 2013; Beck, 2010).

The solution? See my previous post on Creative Resilience for the direction that I am currently leaning towards...